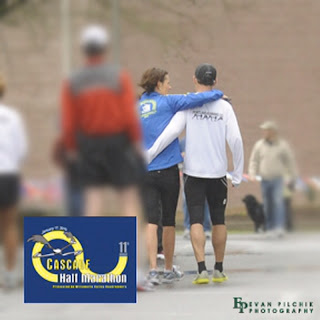 I was telling the story to Dave, Aubree and Christina on the way to Turner, Oregon for the 10th annual Cascade Half Marathon last Sunday - about the wind storm at this same race in 2000. The winds were SO incredible that the lights in the gym went out and garbage cans were rolling across the road in front of us as we ran. There was no chance of talking to another runner as the wind was so strong you really couldn't hear. I had to concentrate on each and every step. This was the year I was going for a PR in the 10K and after the turnaround at mile 3.1 the wind was the strongest wind I have ever ran in and it hit me like a load of bricks. It felt like I was running with a parachute attached to my back. Luckily there was another runner that came up to me and yelled "two telephone poles", I realized that he wanted to share in the work and work together drafting off one another down the last one mile stretch of the road to the finish. The telephone poles marked the place in time when we would switch off. When I was running behind this guy it felt like I was being sucked into a wind tunnel. When I was in the lead I had to pull like I had never pulled before. I can't remember my result that day and the website link is broken (10 years later) but I will never forget that wind on that January day in Turner, Oregon. Of course the legend has grown and now the winds were upwards of 90mph :)

This year as the field was challenged by a head wind I heard many folks discussing how tough it was to run in the wind. As I made my way out to the turn around of the half marathon I found mile 4-5 the hardest. I never seem to feel the relief of the tail wind on the return miles but nonetheless as I came in 1st in may age group this year with my friend Lynn RIGHT behind me, I knew that the wind of today was nothing like the wind of 2000. Shari, Christina and Shawn, three of my running friends ran awesome together which was really fun to see. My husband Dave came in 2nd overall, missed first place by less than 1 second! He is amazing!